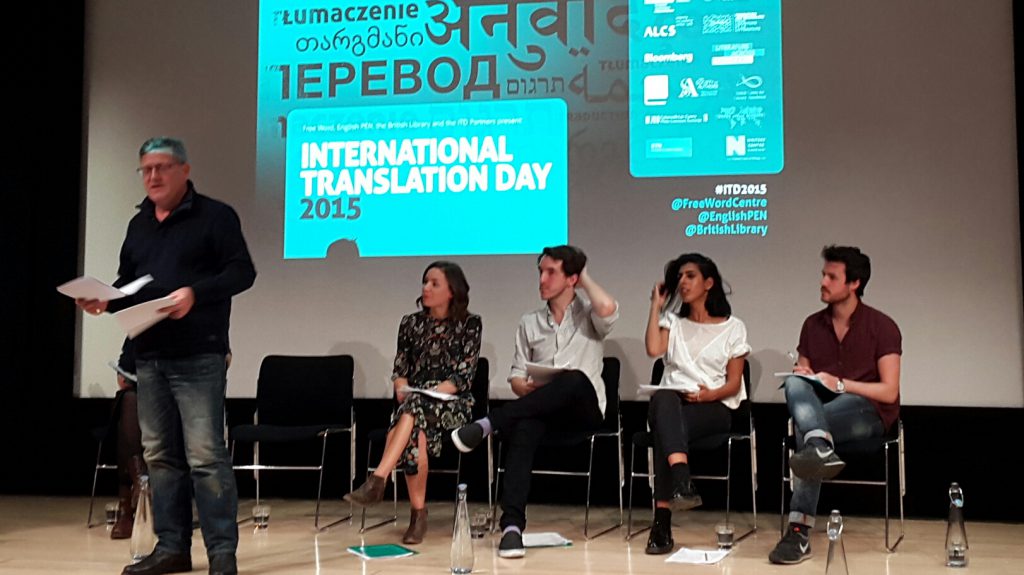 Oh what a day Friday was! What a day. I hopped a 45 minute flight across the Channel from Amsterdam for the annual International Translation Day conference at The British Library hosted by FreeWord, English Pen and my new favorite online circle, the Emerging Translator’s Network.  All about translating literature, the conference brought together a small crowd of literary translators, booksellers, publishers, editors and writers to talk frankly about translating books: what it means, how it happens and why it matters. I can only comment on the panels that I was able to attend, so any feedback from the other ones would be greatly appreciated in the comments!

Opening session: The Rise of the Reader

A stimulating conversation about what it means to be a “reader” in 2015– it turns out, despite all our tsk-tsking over the “digital native” generation, we are still growing up to be pretty good readers. And the thirst for high-quality literary content, not only from our own backyard, but also from faraway places is on the rise. For me, the most interesting part of the talk was not necessarily that the number of readers is climbing, but rather the evolution of what a “reading” actually is. The founder of The Pigeonhole online book club, made an excellent point when she said that yeah, sure you see people playing Candy Crush in the Tube, but if there are people who like playing phone games, there are also people who like books. If we can give those people a digital platform to interact with literary material online, we are essentially giving books, particularly lesser-known and translated works, a chance to go viral. Indeed, the digital rise of the reader is an incredibly GOOD thing for translated literature– people have more access than ever before to events around the world, fueling a curiosity for foreign literature. I also appreciated the tone set by an audience member who emphasized to great applause that literary translators ARE also writers. Maybe we don’t claim the story as our own, but we have the words and bi-cultural knowledge to tell it to a new audience. And a “story” isn’t a story if there are no words to tell it– literary translation is by nature “(re)writing.”

It may be news to some (though certainly not to any of us) that people DO read books. After working for a few years at a small bookstore, I got used to customers patting themselves on the back for supporting the poor ole’ indie bookshop, as if they were the sole remaining member of a dying intellectual elite that still reads REAL books. Ha! Such is not the case–since moving to Amsterdam, I am overwhelmed by the bookstores in every language and the sheer number of people reading in public! This panel considered the fact that such a small percentage of books on the UK market (and US market, for that matter) are translated, so how do we promote and sell “foreign” literature? The message that I walked away with was that readers just like to read good books, and if a reader only reads in one language, they can only judge which books are good in that language. Same goes for publishers and editors. The question is not how do we sell translated literature, but how do we get good literature translated? In this sense, translators play a huge role in informing the industry which foreign books will sell to the target market.

This session was excellent, a major highlight in the conference for me. It began with a look at five passages from literary texts with the question, which ones are translated and which are originally written in English? The panelists, which included a publisher at Peirene Press, the editorial director at Granta (!!) and a well-established literary translator, were also in the dark over which were translated and which were not. It was enlightening to see how they thought through their guesses. For example, maybe a text reads like “bad English” on purpose in order to preserve a tone conveyed in the original version, or maybe an overly smooth text is a sign of a “normalized” translation that glosses over the beauty of the original. If a Turkish writer uses painfully long sentences, what is lost by chopping them up for the English reader? What is gained? There was a somewhat tense moment in the talk when an older audience member asserted that if a translator wants to be called a translator, than he or she must be 100% “faithful” to the original text, suggesting that anything else was sacrilege. One of the panelists countered by saying that a good translation is like a piece of glass that allows readers to peer into the story, even if they can’t walk right through the front door. As editors, they try to wipe away any smudges on that glass to give the clearest view to what’s inside. But this idea of being “faithful” to the original text in the word-by-word sense is not only impossible, it doesn’t necessarily correspond to the writer’s wishes. The greatest takeaway from this talk was that editors can be a translator’s greatest ally.

Closing Session: From Page to Stage

The conference closed with a WONDERFUL live-reading of scenes from two translated plays. The translators joined the actors on stage to talk about the translation process and take questions after the performance. The first scene, translated from Belarusian, depicted a triangle between two teenage girls and their P.E. teacher with whom they were both sleeping. It was a scenario that may translate as “unacceptable” in Western culture, but played out on stage, it seemed like a strikingly normal teenage experience. Given the mic, my question to the translator was about her choice of profanity (there was a lot!) in the English translation, particularly the frequent use of “wanker,” a word that definitely localized the scene in Britain. What other word could she have used? Did she try other ones? She stated that she chose the word that she did for the sake of rhythm, two-syllables suiting the dialogue better than one. The second scene was translated from French-Canadian, depicting an opposite trio of a woman and two men, one of whom was her husband and the other her neighbor who shows up to “console” her when her husband isn’t home. When the husband does come, a sort of mirroring dialogue takes place and the two men ending up switching roles, the husband heading back to the neighbor’s house to “get some peace” and the neighbor heading upstairs to the woman’s bed. The translator talked about translating, especially in Canada, as a political act, and one that can not be taken lightly. A good reminder that translation is more than converting language itself–like it or not, you take the whole culture, its history and representations, with it.

All in all, I was so impressed with the conference, which was definitely worth the flight (and 2 hour bus ride to and from Gatwick!). It was flawlessly organized, deliciously catered and completely inspiring. I look forward to attending again next year and keeping in touch with those I met this year.