Last Wednesday, we walked to the train station in The Hague (Friso cast his ballot right on the platform!) and hopped the train to London. One stopover in Brussels and a few hours later, we stepped out at St. Pancras. Picadilly line to District line and I was walking into the London Book Fair. I arrived late in the afternoon, just in time to catch a few panels before the wine came out. When I started working at a bookstore in Charleston years ago, my co-worker said “Have you ever seen book people drink? They’re a bunch of winos.” It’s true. Afterwards, the emerging translators among us headed to The Blackbird at Earl’s Court for a pint. 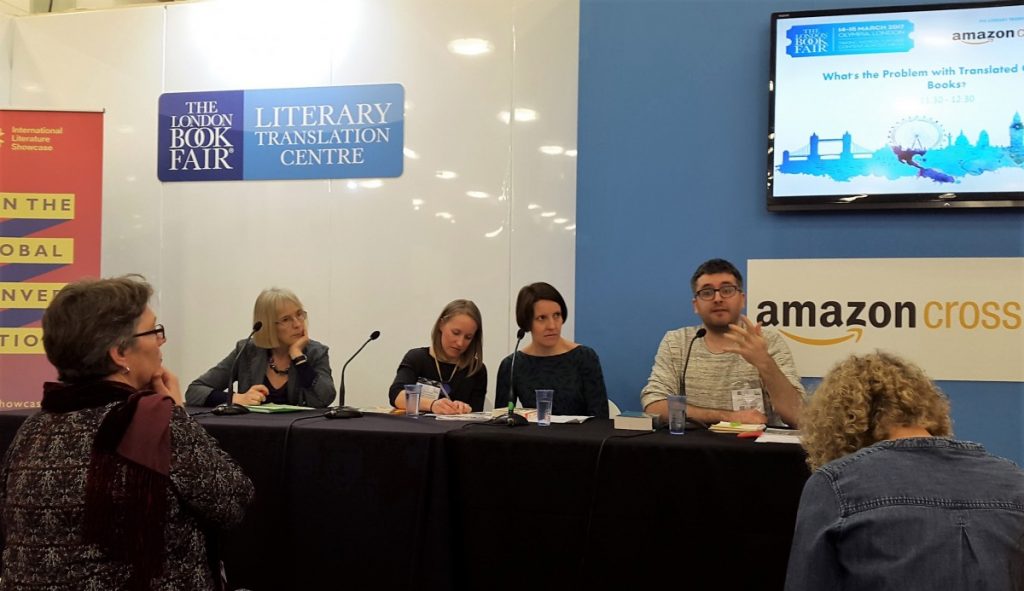 Like I said, I didn’t attend all of the panels, but wow – there sure were a lot of eager translators at Thursday’s talk on “What’s the problem with translated children’s books?” From the get-go, the panelists chose to avoid the title question, preferring to stick to a more positive note. But the so-called “problem”, or the real elephant in the room I would say, is that there just aren’t enough children’s books in translation to go around. Hopefully that will change in the future, but for the moment, most parents and teachers are happy if kids are reading at all. Emphasizing translated children’s literature may not be their first priority.

In a panel on translating writers at risk, translators discussed their collaborations with dissident authors from countries like Saudi Arabia, Egypt, India and China. While it is not surprising that these governments dissapprove of their work, their persecution often becomes more severe upon being translated. Several of the panelists refused to even mention their writers by name for fear of generating unwelcome media attention. There really weren’t so many people in the audience, but that didn’t take away from the fact that the camera was rolling and  a very official-looking London Book Fair plaque hung over their heads. How easy it is for me to sit in the Literary Translation Centre at the LBF and casually listen to stories of writers’ personal ruin and think “How interesting, I should buy that book!” But the fact that I’m even interested in their work at all puts them more at risk. Can reading translated literature be a positive political act? Sure, it raises our awareness of international issues and gives us (by us I mean the mostly Western, university-educated book fair audience members) a good feeling, but do we inadvertantly play a role in the persecution of these writers? Is our readership part of the problem or part of the solution? Something to think about.

Nearly every conversation I had quickly turned to politics. Arriving on the day of the Dutch elections, I was bombarded with questions (mostly Wilders-related) and was struck by how most Brits I chatted with seemed convinced that the Netherlands would be the next domino to fall – but hey, I guess misery loves company. By Thursday morning, I was happy for once to report that the Netherlands had decided to “normaal. doen.” But with the British Parliament busy Brexiting a few miles away and the circus on the other side of the Atlantic, it’s not surprising that politics was the only thriller people seemed to be about.

The holy grail of literary translation for most young translators I talked to still seems to be translating “great literature.” Most of us got into literary translation in the first place out of a love for languages and literature (in its highest forms, of course). Not surprisingly, most of us are what you might call book snobs (I mean how does a conversation move seemlessly from Mallarmé to the Oxford comma to the lack of feminist sci-fi without just a tiny bit of snobbery?). That said, I’ve noticed that there is a real need for creative translators among academic and trade publishers. From what I can tell, there is not a lot of crossover between the literary and commercial sides of the fair, but academic and trade publishers are great outlets for literary translators to explore.