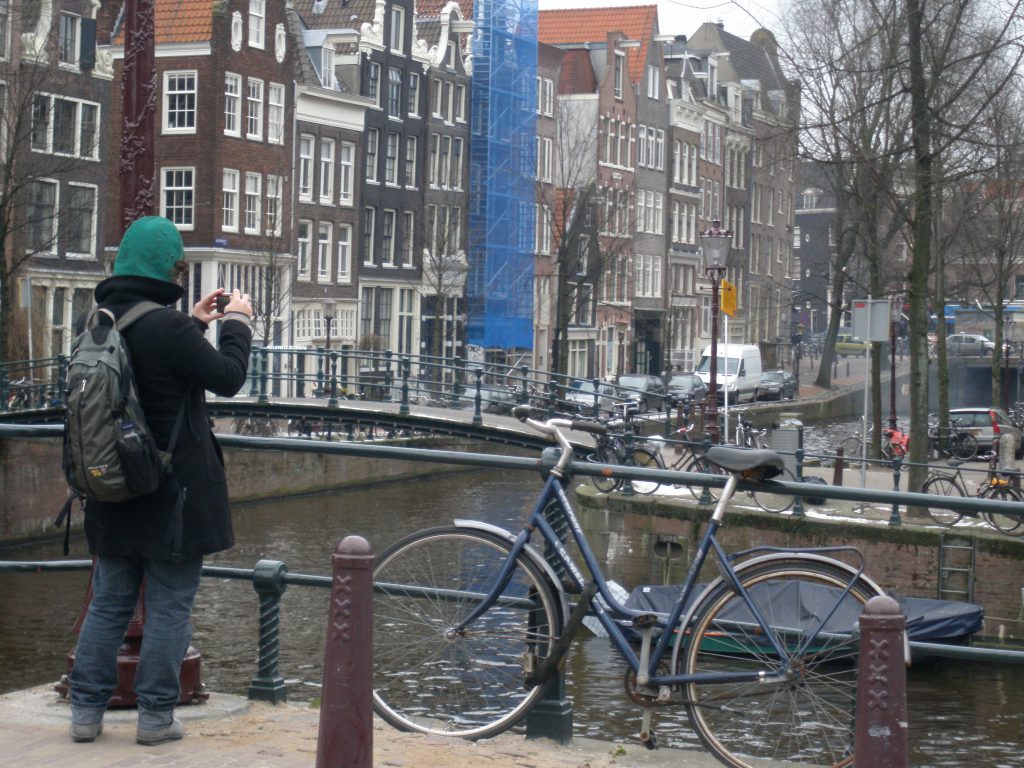 Back in 2010, before I knew anybody who lived in Amsterdam, I came here with my friend Michelle (pictured above). She was on exchange at the University of Groningen and I was studying in Switzerland. It was an icy January, much icier than any winter the city has seen since. We skated across ice patches in the Vondel Park and wandered from shop to shop to get out the cold. Michelle was on a mission to visit Boekie Woekie, a Nine Streets book store specializing in one-of-a-kind books and zines made by artists. At the time, I was still printing editions of my first zine, Premature in Theory, and the store agreed to sell it. Thus began my first connection with this city that I now call home.

Boekie Woekie is celebrating 30 years this winter! After five years of carrying my zines, they are letting me do a little reading on Nov. 28 at 5 pm.

My new collection of very short stories, Amsterdam Shorts, features six stories set in bookish places around the city. Send me an email if you’d like to buy one (PayPal, 8€) or join us at the reading! You can also watch via Live Stream at this LINK.

In the meantime, here is my list of my favorite bookish nooks in the book-loving city of Amsterdam. The OBA is way more than a library. It’s more of an extraordinary public building that just happens to be full of reading, listening and watching material that you can borrow. Instead of griping about how nobody reads books anymore, the OBA has expanded its services to keep in step with the times. Now patrons pay a nominal fee to check out books and use wifi if they must and the money supports the collections as well as workshops and lectures. Oh and there’s a bar upstairs. Just saying. Most visitors take a quick peek at the beautiful Rijksmuseum Library from the upper balcony, but you can actually use it as a reading room. In addition to old leather-bound tomes from the collection, there’s a nice assortment of art magazines, wide black working tables and cozy light. If you have a Museum Year Card, you can go anytime you like. I once had a conversation with a bookseller here about One Flew Over the Cuckoo’s Nest and how when he finished reading it for the first time, he threw a box of his ex-wife’s things into the fireplace and never called her again, which was why it was his favorite book of all time. Open on Fridays, it’s a great nice place to browse before a borrel. Athenaeum’s magazine collection is toppie top top, full of magazines from small presses around the world. You can follow them on Instagram and find out what’s good. They also sell books of course, offering well-curated collections in French and German in addition to Dutch and English. It goes without saying that the ABC is as good as any indie bookstore you’ll find Stateside, maybe even better. Unabashedly American in its collection, it still offers a wide range of world literature in English and a nice magazine collection, where you can buy one of my all-time favorites from back home, The Sun. They also host events with big name writers, most recently Patti Smith.

A center for “American culture in the Netherlands”, the JAI brings people like Jonathan Franzen, Marilynne Robinson, Fareed Zakaria and T.C. Boyle to Amsterdam. I recently volunteered at an event with Robert Putnam, where he reminded us all that America has significantly more serious social problems than the Netherlands. Nice for the Dutch to hear, but for the other half of the audience, kind of embarrassing.

I first heard about Versal from a friend who edits Structo Magazine and happens to live in the Netherlands. When I mentioned it to Sara, my old Charleston roommate, we realized that they had in fact published some of her poetry a few years ago. Small world! Versal is Amsterdam’s only literary magazine published in English (as far as I know) and they host monthly gatherings. At last month’s event, I had a nice chat with Isabel Fargo Cole, translator of Annemarie Schwarzenbach. My heart has a soft spot for anarchist book shops and this is one of the best that I know. The first zine I ever read was an anarchist manifesto calling people to put their work out into the world by whatever means they could. It was written in the 90s before blogging was a told stories of these underground bandwagons that peddled handwritten magazines and self-drawn maps of squats and train-jumping networks. My own zines are nothing of the sort, but the medium still fascinates me. A whole shop devoted to travel books, and I’m not just talking about Lonely Planets– but travelogues and travel writing by journalists and journeyers traversing every region on the globe. In addition to the classics, they also offer a number of self-published and small batch travel diaries from people who’ve taken long trips by bike, foot, container ship, you name it. The back room is full of antique magazines like Life and Paris Match and 20th Century newspapers with famous headlines.

So those are a few of my favorite places to browse for books in Amsterdam. If you’re in town, come to Boekie Woekie this Saturday, Nov. 28 at 5 for a little reading!